The Power of Film to Mobilize Change

Lea Howe is an MTCC AmeriCorps VISTA serving with the FoodCorps team in Boulder, MT.

Film is a powerful tool in the sustainable food movement. Over the past few years, several documentary films– big budget and bootsrapped productions– have changed the way Americans think about food. The strength of these documentaries lie in the artful combination of poignant messages and compelling imagery.
Here’s why. The “problem” is often too big to comprehend. But real people doing real work often makes change seem possible. Which has underscored the power of many documentary films. Putting a face to others working in the trenches has inspired many new people to “join” the movement.
Documentaries have been one of my go-to tools here in Boulder. I have been here for nearly 8-months and my job is known by most in this small town. People often refer to me as  “Food Lady,” “Health Nut,” or “Garden Girl.” In fact, just the other day, I had my first lesson with the Kindergarten class and when I walked into the room, the kids jumped out of their seats and excitedly asked if I’d brought them vegetables to eat.
“Miss Lea, do you have any of that yellow mush for us!”
“You mean lentil hummus?”
“Yes that!”
“No, today we’re going to make nut butter!”
“Ok, but sometime will you bring us that yellow stuff again?”
“Yes, I’ll bring you hummus soon.”
(How cool is it that kindergartners are begging for lentil hummus!?)
While I am thrilled that students, teachers, parents and community members recognize and appreciate the work I do, there are also times that I begin to worry that my message (re: the benefits of healthful eating, supporting local and sustainable food, starting gardens, etc.) gets tired. And maybe even lost.
Which is precisely the moment I turn to film. It has been incredibly important for me to have my information reaffirmed and reinvigorated by other sources.
I started a weekly Food Film Series at the Boulder Public Library in January. Each Thursday at 7PM, community members come to view a different documentary on food. I provide healthy snacks often inspired by the subject of the film (i.e. Non-GMO, organic popcorn for King Corn) and community members stay afterwards for a discussion. 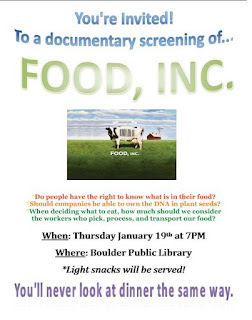 It’s not uncommon that we find ourselves in the library until well-after 10PM in passionate conversation about the ramifications of the film’s subject matter in our lives. Everyone asks: “What we can do here in Boulder to increase awareness about the issues and work together for change”?
The ideas that have blossomed out of this film series are astounding. Sure, it was my work in classrooms, Methodist hall meeting rooms, gardens, and town streets that started the conversation. But it often takes a stirring message–and some powerful imagery– to excite people to action. Eight films later, teams of people have emerged from the woodwork ready to make change in Boulder, or at least in their own lives.
I am excited to see how many people we can reach one year- and fifty films – from now.
Speaking of film, check out Jefferson High School’s PSA called “You Are What You Eat.” It was recently awarded the Grand Prize for Montana Team Nutrition’s Youth Focus on Health Video Competition!
http://vimeo.com/36507178
Lentil Hummus:
Ingredients:
●      Montana-grown lentils
●      Olive Oil
●      Garlic
●      Lemon Juice
●      Salt
●      Spice (smoked paprika, cumin, curry, or any other spice that strikes your fancy!)
Instructions:
●      Cook lentils with several cloves of garlic, a drizzle of olive oil, and a dash of salt in water until well done/mushy. (approx 1:3 ratio of lentils to water)
●      Toss in spice to taste when almost done boiling.
●      Pour in blender with a squeeze of lemon juice and a tad more olive oil.
●      Blend until creamy.
●      Use as dip for your favorite fruit, veggie or bread. Enjoy!
Lea’s Films Screenings in Boulder: 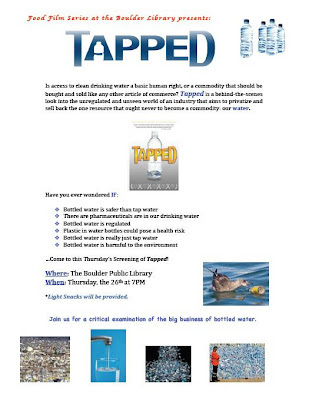 Other films we are planning on screening through April/May: