Summertime… And the Gardening is Easy

This Monday snuck up on me like quicksand: a slow and unexpected sink. I rolled out of bed with no particular urgency — no early morning class to prepare for, no school bells ringing, not even one frantic email from a teacher. A glance at my Google Calendar failed to produce the usual rainbow-colored anxiety headache. By noon I had pulled off a leisurely pumpkin planting with a group of preschool students, but then became mired in emails and long-procrastinated projects in the afternoon.

Adjusting to life without the dependable structure of school and classrooms has been a steep learning curve since school let out at the end of May. There is still plenty to do, the difference is in my approach. Working with kids outside of the school year is a whole different bailiwick. Instead of coming in with a planned lesson and learning objectives I prepare a general theme, an idea for an activity, or a project that needs to get done in the garden.

For example, our last after school Garden Club activity of the year was to make a “weed salad.” Abundant rain and sun had created quite a weed issue at that point: lamb’s quarter was popping up between the perennials, volunteer sunflowers were sprouting in vegetable beds, and red orach (or miner’s spinach) was springing out of the gravel and mulch around raised beds. We showed the different weeds to students and explained which ones were edible.

Harvesting a salad turned out to be much more fun than just picking weeds, and the students went on pulling until the garden looked almost spotless. We topped the greens with a homemade garlic chive vinaigrette and a sprinkle of sunflower seeds. The students went wild. Weed salad quickly became the most popular cooking project of the year.

Another summer project I’ve been working on is planning Kids Corner activities for our weekly Farmers Market. Teaching kids about gardening and food at a farmers market poses some challenges when compared to classroom teaching. Families come and go throughout the market, youngsters of all ages are likely to to be interested in market activities, and the teaching space is always prone to the elements — rain, hot sun, and high winds can swiftly end any fun activity. 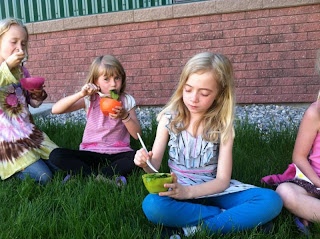 I have found, practically by accident, that open-ended, creative projects work well in this setting. Last Friday I brought one of the school’s four worm composting bins down to the market with examples of food items worms like to eat. What I thought was a last-minute, poorly thought out activity proved to be a hit. Just minutes after the market bell rang I found myself engulfed in a sea of children clamoring to see, hold, and feed worms. I taught younger kids about worm anatomy (ie. this is the worm’s head), and I taught older kids about the different worm “food groups” and how they relate to human nutrition. The most rewarding part of the activity was seeing children marvel at the wriggling worm in their palm and helping kids learn to care for a living creature. 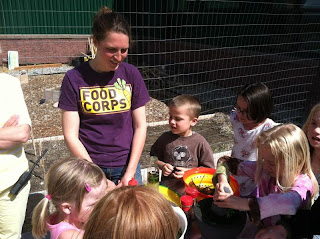 In Ennis we’re relaxing into learning for the summer. Free from homework and the limits of a 15 minute recess break, the kids and I are spending more time each day tending to the basic needs of the garden. We’re asking questions, playing games, and quietly observing and appreciating the beauty of the natural world in our valley.

Natasha Hegmann is a service member in Ennis.