Lea Howe is an MTCC AmeriCorps VISTA serving with the FoodCorps team in Boulder, MT.

I didn’t sleep well the night before. As I wrestled with my sheets, I imagined the worst: hushed whispers and muffled laughter, eye rolls, heads nodding off…or worse, expressionless silent stares.  I couldn’t remember the last time I felt this way. I walked into the Jefferson High School Film class with rattled nerves, a print out of my talking points, some homemade granola, and a worst-case-scenario backup video of Jamie Oliver’s charismatic TED Talk on School Food – if all else failed, I would hit play and let Jamie run the show as I passed out delicious granola.

Mr. Hesford—the beloved film teacher— settled his large class, gave a friendly introduction, and then left me to run the class. I instinctively looked down at the notes in my hand and started clamoring about food being the solution to many of the world’s problems. I went on and on about the ills of our food system and the resulting environmental, health and economic crises. 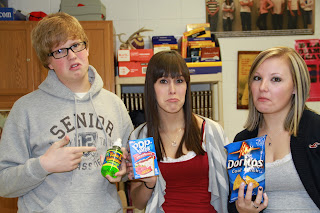 After rattling off a couple statistics, I glanced up from my paper for the first time and actually looked at the class. It was a diverse bunch: there were athletes, hunters, and artists, some dressed in pajamas and others were done up in high heels and make-up.  It occurred to me as I paused and looked around the room, rather than preaching my beliefs, hopes and dreams, I wanted to get to know them and hear what they had to say.
I broke the ice with a simple question, “What are some of your favorite foods?”  Immediately, one of the outgoing jocks yelled “Steak!” Other classmates chimed in with “Pizza,” “Pasta,”“Meat” etc.  Good. I had their attention. We talked about our “go to” comfort foods.  This led into a discussion of foods that make us feel best physically and emotionally.  The athletes talked about the foods they eat before big games. Other students talked about how sugar-laden energy drinks made them “crash.” And most agreed that it was hard to eat well with the lack of healthy food in Boulder.
We were getting somewhere: we all agreed that diet effects behavior and mood.  And with a little prodding, the class agreed that fresh foods are the best way to stay healthy, do well in school, and feed our families. Students excitedly talked about the possibility of getting a salad bar at the school and even learning to cook themselves. We eventually landed on the topic of our first PSA film: the effect of diet on academic and athletic achievement. 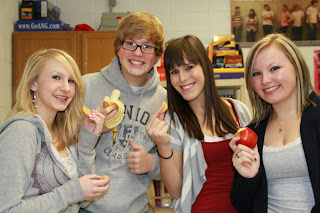 Fortunately, we never had to tune into Jamie. When I began to really listen to the students, we together unearthed our best ideas.  I certainly had to steer the ship but it was the students driving the conversation forward. After all, they shop at the L&P, the local grocery store, down the block. They know their friends. They understand their community.
Students left the class excited and empowered to make change in Boulder (or at least in their personal diets), I was not handed a “how to” manual when I arrived in Montana. Listening to the students in the film class that day, it became abundantly clear that collaboration is the most important ingredient in making change.  It is the diversity of voices that gives the food movement strength. And it’s that strength that I am going to try to tap into this year in Boulder. 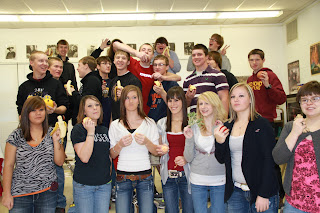