Anne McHale is an MTCC AmeriCorps VISTA serving with the FoodCorps team in Glendive, MT.

Anne McHale, serving with Glendive’s Community GATE, shares blog seven in our weekly series of updates directly from Montana FoodCorps members.The second-grader’s face went from scrunched-up skepticism to wide-eyed excitement when I explained the orange scoop between her corn dog and nachos was “a lot like pumpkin.” Actually, the conversation went like this:
“Did you try some squash?”
“No”
“How come?”
“Yuck!”
“Don’t you like pumpkin?”
(vigorous nodding, followed by brief thoughtful reflection and then a miniscule taste of the bright orange squash) 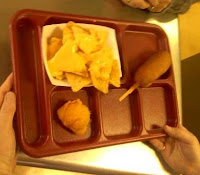 This was the first day of Farm to School Month, and as a Montana FoodCorps member serving in Glendive, I’ve been pleasantly surprised to find the district administration receptive but realistic in recognizing the challenges to sourcing school food locally. In this fiercely proud and sparsely populated corner of the state, the messages of food independence, and healthy bodies, healthy economies resonate. Most Glendivians are few, if any, generations removed from agriculture, making it much easier to tout the benefits of a farm-fresh diet.

Despite a genuine understanding of the value of “local,” the district administration and kitchen staff have valid concerns: Will the kids eat it? Do staff have time to prepare food from raw ingredients? And what will we have to cut from the budget to make it happen? 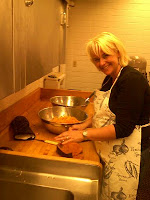 Still, inspired by state and national coverage of Farm-to-School Month celebrations, we decided to tackle the challenges and planned local food events in October. The schools were interested in trying local squash, local apples, hummus made from local garbanzo beans and local garlic, and Montana-made lentil burgers from Mission Mountain. It quickly became evident what all we’re up against and what’s at stake.

We pieced together 100 lbs of buttercup, butternut and a locally dubbed “green squash” requiring multiple trips to the farmer’s markets in town. After hours of hard, hot volunteer labor in the Dawson County High School kitchen it was defeating to see that we had about half of what was needed to fulfill the federal vegetable requirements. It meant a last-minute raid of the local-food store, an unscheduled trip out to a sympathetic farm and snatching the prize pumpkin off my own front stoop. No squash within a 50 mile radius was safe save four pretty enough to act as “display squash” on each of the lunch lines. 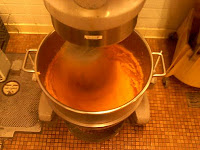 For the most part, the K-2 kids at Jefferson School where I spent lunch weren’t completely crazy about the “whipped squash” that was prepared with butter. However, nearly all the kids could be convinced to try the squash when it was likened to pumpkin, with which many are familiar. The students I talked to who were enthusiastic about the vegetable serving offered interesting insights to the psychology of healthy eating: from what I could gather, members of the clean plate club came from families who regularly prepared squash in some form.

While for some folks this lack of familiarity with local foods is an argument against trying them in schools, for me as a FoodCorps member the gap in education is the primary motivation. It’s a learning process for everyone involved, myself definitely included. If we had layered brown sugar on the squash would it have been a bigger hit? Probably. Is that a compromise we want to make? We’ll do squash again, and my bet is that more kids will try it each time, regardless of the added sugar. For FoodCorps members as for students, the cafeteria is an important classroom. 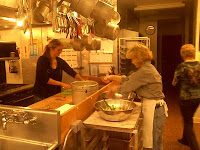