Eating Local in the Bakkan

Anne McHale is a FoodCorps Service Member in Glendive.
Promoting local foods in Eastern Montana provides a pretty unique set of both challenges and opportunities. While much of the country is still emerging from recession and unemployment rates reflect this, in Glendive businesses struggle to find staff, and, occasionally, have to cut down on the hours they’re open because they can’t find enough workers.
Moreover, many of the social issues that come with an energy boom are exacerbated by poor economic conditions in the rest of the country- down and out men and women come northward enticed by rumors of jobs. Some bring their families, some use their last dollar getting out here only to find there is a lag time of one to six months to get jobs that are competitive and extremely physically demanding.
In the meantime, local services from the food bank to law enforcement to waste water treatment strain under the pressures of increased population. Local people are seeing their rents double and triple and anyone looking to hire has to take into account housing shortages.

The fact that Glendive has seen this sort of boom come and go before complicates things further.  There is a hesitancy to invest in infrastructure when the tax base will plummet sooner or later. Some folks hope sooner, others later, but they all know the fickle nature of gas and oil industries.
Farm to school and the district are not impervious to the oil boom- the biggest challenge in planning a field trip is scheduling bus drivers because everyone with a commercial driver’s license is in North Dakota making much more than the district can afford to pay. The salad bar at the middle school has been put on hold because there isn’t the staff to devote to its maintenance for the same reason. 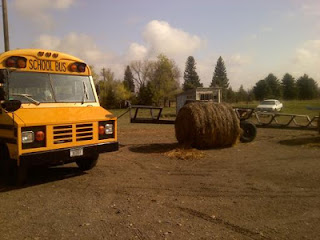 Above and beyond that, it’s difficult to sell the administration on local food as a priority when they’re hard pressed to hire (and house) teachers mid way through the year to accommodate new students, when existing facilities don’t have enough classrooms and these same kids are often going home to tents or campers in the freezing Glendive winter.
I often emphasize the idea that local food systems can be stabilizing both economically and socially. Glendive is a historically agricultural region capable of supporting jobs and families long after the Bakken oil has been tapped out, and the economic opportunity exists to develop food processing facilities that help producers add value to their products.
As meetings between not for profit organizations often tend to do, we always seem to end up talking about how difficult it is to get funding. Unlike in other places, however, here the conversation always turns towards grants made by oil companies in nearby communities. For example, the Boys and Girls Club here received $10,000 from an oil company. Small beans for the company but a huge windfall for the club. 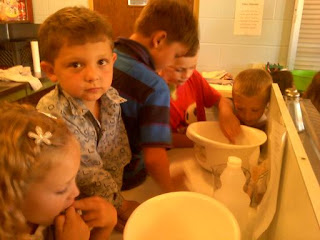 Another positive outcome from the influx of industry is the old maxim that it wasn’t the miners who got rich in the California gold rush but the shovel sales men. The demand from the oil field for food is astronomical, and my host organization is working with the community college to push a culinary arts program that could train people to meet this need. Along the way they’d be exposed to the farm to table ideals.
It didn’t take me long to learn I couldn’t make assumptions about this community or especially my students’ living situations. I just hope my efforts are helping them put down roots.